Anyone would think this Craftworld was Iyanden...

Well, it certainly has been a while between drinks. To say the f*&ing least. Life, as it turns out, has a way of directing us regardless of our best intentions. Seriously, as the title states... its like a ghost army has been resurrected.

So, this post will go over what has been, where things are at and where they're going over the next four to five years. Yep, still got that long to go... in the immortal words of Idris Elba - Reset the clock.

1. Kids - Had one to add to my "eBay Child". To say they're a handful is an understatement. Any parent knows this though. With them, come expenses... lots of expenses. Add in special needs... its a party.

2. Health dramas - We all have them, this is normal. Ours just came all at once. I won't lie, there was a moment where I probed for interest in selling the Warhost. Thankfully, it did not come to that, but it got very close.

3. House stuff - COVID-19 brought with it some pretty interesting changes, which we have all been affected by. Not least of this is working arrangements. To do this, some office/livability factors were required. It paid off, as I'm lucky enough to work for an organisation who have allowed me to work from home full time due to the life events that have transpired since 2017.

All of the above has added up to the Warhost coming a distant 20 something on the list of priorities.

NB: I might have also invested in the Battletech Clan Invasion Kickstarter... my second love.

Fast forward to the present! Just what has been sent out? What came back? What's left to go?

1. HQ Models - All HQ models are with, or on their way back from either Vincent or Linford. And they look the ducks nuts. 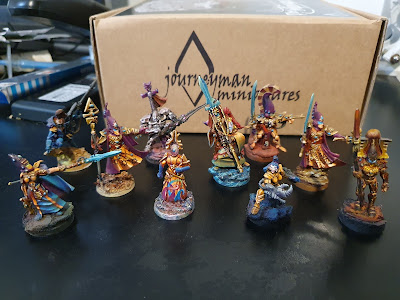 As with myself, both Vincent and Linford have their lives and dramas to deal with as well, so the last are trickling in (Jetbikes an exception...) - More to come, stuffing about with a light box to get some "blog worthy" photos up.

2. Rogue Trader Models - As previously displayed on the blog, two solid boxes filled with metal were sent off to Arawn.. somewhere around 500+ including a few aspects from the Artel W range long over due for paint work. These have no deadline set, when they're done, they're done. This was batch 1 of 3. 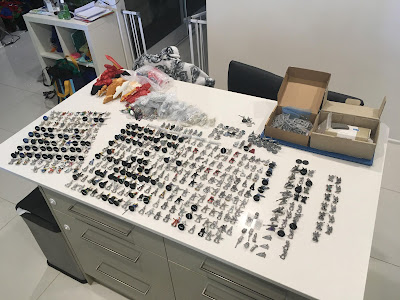 *Note: This was just a small portion... almost 20kg of metal was sent off... I genuinely felt bad.

So what is left to go out?
1. Lots and lots of Wraith units. To the tune of about 150 or so... probably more.
2. A batshit insane amount of Jetbikes, both old and new, plus a few dozen Corsair units (60 or so). From memory, the Jetbikes alone in total came to over 500 in number, ranging from old GW sculpts, to Ghost Miniatures, etc.
3. Artel W Aspect and Ranger sculpts. Again, these match previous unit numbers, so generally that's 30 of each Aspect and 50 of the Ranger variety.
4. Armorcast... lots and lots of Armorcast. Wave Serpents, Tempests, Phantom Titan with all the mods, Revenants, prototype Bright Stallions... name it, minus one or two... its probably in there.
5. Forgeworld Super Heavy Tanks, both the MK1 and MK2 plus Lynx varieties. If memory serves correctly, there are around 30+ Warmachines all said and done across both ranges.
6. Miscellaneous add ins as they're released to market... this shitstorm never seems to end.
Posted by Dave Drinan