It all began with the company Armorcast. Yes those lovely lads who decided to take Epic scale Titans and bring them into the 28mm scale, just for a laugh.

During my weekend web browsing adventures at my fathers office (I didn't have Internet at home you see, yes Australia is a tad piss weak in that regard), hording articles on Eldar tactics, builds etc, I came across Armorcast's website. To me, I had hit paydirt. Very few people in Australia, let alone the local gaming circles had heard of this bunch - nor could they afford the pretties.

Needless to say, I had to have them. My Aunt (who was the only one that could identify with my obsession - hell she was hooked on Vintage dolls), saw the glee in my eyes, stating if I got good marks that year, i'd find myself in the good company of a Revenant Scout Class Titan.

Sadly, it was also the year I discovered girls - more the point, girls with boobs. My chances of owning one were now scattered to the winds.

Adding insult to injury, Armorcast were given the pimp slap by Games Workshop, who they were operating under license via, which ultimately mean't that in 1998 they could no longer sell such delights. I was crushed.

Now I was somewhat gainfully employed, or at least had a few dollars to burn. The website "Bartertown.org", had been found in my travels for cheap miniatures.

Low and behold, I did find the Revenant Titan I had so longed for. And it wasn't much more than the original asking price! So after sending a mail order overseas, waiting a month and trying not to wet myself in anticipation - it finally arrived. Yet, did it sate my hunger? No, not really no. If anything it made things worse.

Rewind to 2001. Around this time, another company sprung up (as a branch of Games Workshop). Forge World had been thrust into the spotlight with the Eldar Scorpion Super Heavy Grav Tank debuting in a December edition of White Dwarf. Again, the timing couldn't have been more perfect. December was always full of funds from loving family members. Normally, I wouldn't have been able to justify the $300AUD price tag on this monster, however I had just spent two weeks (some of which hospitalised) with a combined case of Glandular fever and tonsillitis.

I badly needed a "pick me up" given I was so weak from not being able to eat that I needed assistance to get out of bed.

When the Scorpion arrived, it certainly did give me a lift, except for the fact one engine was bigger than the other and the fins had all been busted to hell in transit. Seriously, the engine on one side stuck out 2mm past the rear of the hull. I still have the tank, but the runabout GW gave me had me ready to throw the thing through their shop window.

Fast forward to 2003ish. With the Super Heavies now starting to look a little in the minority amongst a rapidly growing Craftworld force, I felt they needed a friend. In the form of a Phantom Battle Class Titan.

After posting on Bartertown.org (now .com), a VERY generous Canadian sent me a message stating he had one, mint in box that was ready to part ways. The real kicker is he only wanted what he paid for it. My head swam in disbelief - A mint condition Phantom Titan for a cool $180USD. The shipping kicked my arse a bit, and it did take almost two months to arrive - but by god was it worth it.

This newly acquired tower of destruction was the envy of my friends - and certainly saw a few mouths drop to the floor. Now the proud owner of three Super Heavies, I was on the path to something. 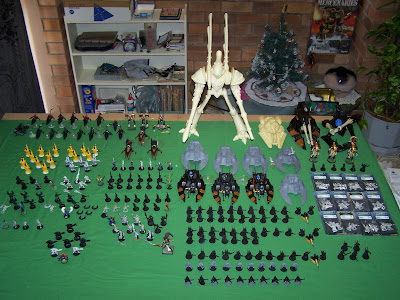